There is a sort of phenomenon in the entertainment world (and seemingly more specifically in the music world) where music serendipitously makes its way to your ears from all the way across the globe. Sounds get passed on, media links things further and further, and then, the music finally reaches you. I am extremely excited to have had this serendipitous experience with the Young Monks. The lively, psychedelic, five-piece indie band emerging from Canberra, Australia was brought to my attention with their debut single, Jarmin’ in the Dark: a danceable, reggae-infused, and charismatic ballad that stayed on repeat for my summer 2019. The Young Monks presents bubbly chords, a slicing electric guitar, and amiable harmonies, to create their unique, reverbed-to-aquatic atmosphere. Their eclectic instrumentation varies through each song but cohesively offers a contented ambiance perfect for a drive along the beach. In preparation for their second studio album (which is currently being recorded), we wanted to get to know the group a little better.

Here’s what we found out:

How did the band originally get together?

Foundations are set in the friendship of Sam and Steve, they’ve been playing together since they were kids.

Mateus joined the mix at the beginning of highschool when he moved to Australia.

Thommy was always in other heavier bands around this time, but once we were adults he decided to make his way to the vibe side of town.

Jarrad has been funking and jazzing it up for a while now, but before that, he was a veteran amongst the dark circles Thommy frequented. Nowadays you can find him smashing tropical beats or in hospital.

Who plays what instrument?

In a studio environment, there are very few clearly defined roles, most of us will play any instruments available at the time, and It’s a very collaborative/experimental process when we’re in that setting.

Touring we have Steve on the guitar and keys, backing up vocals

Sam on guitars, backing up and sometimes leading vocals

Thommy ripping the bass and providing the highest quality of banter

Jarrad “Jazz” giving us the good underlying rhythms on the drums

And Mateus doing some singing here and there.

How would you describe your music?

We are an experimental collaborative. We have a lot of interest in progressive and psychedelic music of the past, but there are a lot of modern folk, independent, hip hop, and experimental artists of today that we also draw inspiration from. 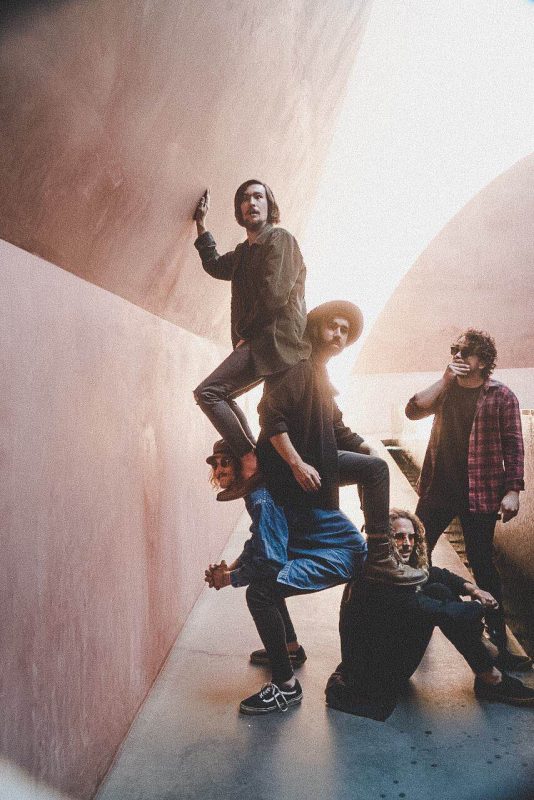 Have you guys had any other career paths or passions that clashed with music?

Nothing has clashed with music in its current form,

As a collective, we have a lot of passion for visual art, moving images, sculpture, construction, and design. A few of us work within these industries, and with that, we’ve brought aspects of these trades into our work with Young Monks. Ideas get taken from a point of conceptualisation to extension not only through a sonic space but to a physical identity, giving songs a visual element to accompany them.

What are some of the major lessons you’ve learned working together?

Most times, the mindset of a multitude of individuals will not be synchronous, And that’s a great thing. Understanding where differences lie and using those differences to progress an idea forward really allow us to expand our schemas surrounding the creative process.

Out of all of your released music do you have a favorite? If so, why is that one your favorite?

Out of all of our tracks, there’s not really a consensus on a single best track. For a lot of them, there’s something uniquely special that appeals to a single member, but maybe not as much to others. Tracks like “Old Faithful”, which never made physical print, will always have a soft spot in our hearts. We still play it live sometimes, and it’s always a great time when we do.

Who or what are some of your biggest musical influences?

Musically we have varied backgrounds, so this question is difficult too. To list just a few

The list could go on for a very long time

our new single drops on friday. who's ready?

As a band, what are some of your major goals in the next five years?

We’re currently coming up to our second album, so that’s definitely something we’re excited to share with the world. Beyond our musical offerings, we’re working closer together towards developing our show on a visual level, introducing more elements of motion and colour to accompany our sound.

What can we expect from you in the near future? Do you have any new music or live shows coming soon?

We have been scarcely seen whilst working on our latest record, but we prefer it that way. Things are coming together to a really nice point now, so it won’t be much longer until new music starts to make its way out into the wild. With all new music, we will bring a new tour with it.

What song are you listening to right now?

Right now as I type this, I’m listening to Beach Life-In-Death by Car Seat Headrest

Guiding you to the future of music.
—————————
Interviews, album reviews, playlists, and a love for music.